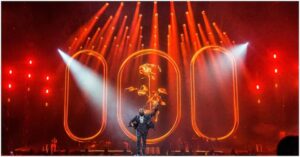 On the 5th of March, Davido made history as one out of two African acts to sell out London’s 02 arena. Tagged ‘WE RISE BY LFTING OTHERS’, the show had been packed with performances from Davido as well as guest performances from friends and other artistes and the night had been a movie unrolled on the stage.

As a result, while the show was followed closely by countless people, in this list, we draw up a list of some highlights of the show to ensure that they aren’t forgotten and also as a bridge for those that missed them, as these are some of the moments that will go down in the annals of Nigerian music history.

Here are some unforgettable moments from the SOLD OUT Davido’s 02 Arena show:

Davido’s aide, Israel DMW was jokingly referred to as the first Bini person to be at the 02 but probably made history as the first one to open up a show at the 02 Arena. Hilarious and much-loved for his very open adoration of his boss, Davido, Israel had taken to the stage Bini attire with a bell in hand which he rang as he made welcomed the guests in his native language and gave glowing marks about Davido to the 20,000 people present at the venue.