Manchester City boss Pep Guardiola on Monday refused to be drawn into a “stupid” debate on tactics ahead of his side’s Champions League quarter-final first leg at home to Atletico Madrid. 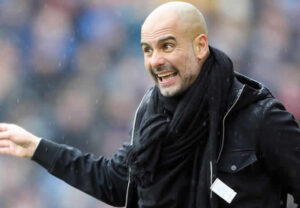 The Spaniard dismissed suggestions that the match would be a clash of styles between the possession-based football he favours and the cruder style of Atletico manager Diego Simeone.

“I’m not going to talk one second about this stupid debate or our tactics,” he said. “Everyone tries to win the game.

“If they win they are right, if we win we are right. It’s for the players, the difference will be there.”

Manchester United were undone by Atletico’s spoiling tactics in the previous round but Guardiola had no time for the notion the Spanish club were an “ugly” team.

“I’m not going to judge what they do, I’ll analyse what to do to get a good result to go to Madrid next week,” he said.

“What is playing ugly? My team won in Old Trafford 1-0 and Bernardo Silva spent five minutes in the corner. That is not ugly, it’s defending the position.

“I never judge the opponents, what they do.”

Meanwhile, Guardiola said he always overthinks his tactics in the Champions league and joked he could even line up with 12 players.

“In the Champions League always I overthink. New tactics, tomorrow (Tuesday) you will see a new one,” said the former Bayern Munich coach.

“I overthink a lot, that’s why I have very good results in the Champions League. It would be boring if I always played the same way.”

Guardiola, who twice won the Champions League as coach of Barcelona, appeared to make fun of his approach by adding: “The movements are different, the players are all different with different personalities.

“That’s why I overthink and create stupid tactics. Tonight I will take an inspiration and I’m going to do incredible tactics tomorrow. We will play with 12 tomorrow!”

The reigning Premier League champions have yet to win European football’s most prestigious trophy. They came close last year, losing 1-0 in the final to English rivals Chelsea.

City midfielder Bernardo Silva added: “We know it will be very tight. It won’t be an open game because that isn’t Atletico’s quality.”