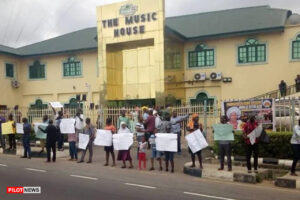 It was gathered that the robbers invaded the station located in the Challenge area of Ibadan at around 6.30am during a live gospel broadcast.

Hotgbedu Media learnt that they gained entry through the station’s front door, fully armed. Although they could not gain entrance into the studio where the live programme was being aired, the station had to go off air for a while.

The gunmen, who were said to be three in number carted away laptop computers, phones, and ATM cards of members of staff present, as well as laptops and desktop computers belonging to the station.

A staff member of the radio station said one of the computers stolen contains files for a planned television station which also belongs to Ayefele, and that nobody was injured or killed during the attack.

In another development, the Oyo State Police Command has begun an investigation into the incident.