Barry Jhay Arrested In Ghana In Connection To The Death Of His Label Boss, Kashy Godson 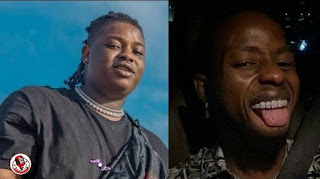 Nigerian singer Barry Jhay has been arrested in Ghana, in connection to the death of his label boss, Karshy Gordon.

News broke on Sunday, March 7, 2021 that Karshy Gordon, the boss of CashNation Entertainment committed suicide by jumping from a balcony in Ghana.

It was exclusively learned that the singer has been arrested in Ghana in connection to the death of Godson.

Another source said that,

“Barry Jhay and Karshy had a fight in Ghana over accounts and other label-related issues in Ghana. When the argument got heated, Karshy punched Barry Jhay in the mouth.”

Barry Jhay confirmed this when he shared a video of his bloodied mouth on social media.

“See the way this guy beat me,” he said in Pidgin English.

“I didn’t do anything, I was recording. I’m done with Kash Nation,” he also said.

Hours after the video, emerged, news of Gordon’s death was reported and police believe the incident might be connected to it.

A man named Rina, who is a friend and brother of Karshy Gordon has offered some perspective.

On his leaked WhatsApp story. He wrote that, “My brother gave you his Benz worthy nine million naira. He gave you his Hublot worth 15 million Naira. You’re dead, Barry Jhay.”

On another slide, he also wrote that, “He was putting on his shoes and some blogs and idiots are saying that he committed suicide. My brother was killed!”

In third slide of his post, he claims that members of a confraternity which Barry Jhay belongs killed Godson while another in another slide he claims that the fear of military police made Godson jump.

As at this time, all efforts to reach Barry Jhay’s management has proved abortive.

Not much was known about him before he hit headlines in June 2020 after he was arrested by the Lagos Zonal office of the Economic and Financial Crimes Commission (EFCC).

The anti-crime unit in a statement accused the label owner of using proceeds of his fraudulent activities of funding his lavish lifestyle.