History of Ijebu Igbo and the first King

Posted by Mayorsearch on January 8, 2021 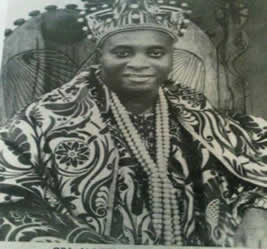 Ademakin or Orimolusi, whose poetic praise (oriki) was “Adoro Oke”, was from the Osimore family and was a very strong hunter.  It was while he went on a hunting expedition to the eastern area of Ijebuland that he met a man named “Ogu Ogun Elegi”, who was an “Olode” from Imusin.  Both of them started hunting together and came across an elephant.  Instantly and simultaneously, they both shot at the elephant, killing it.  As they carved the elephant, a scramble ensued for some of the precious parts, but Ademakin exercised restraint and said: “Erin mo Olusi.”  It was this incident that made Ademakin’s wife (Sopen) to advise him to relocate and he did.  So, after he relocated, the story was that whenever people form out-of-town came looking for Ademakin, Ogun Elegi would tell them as follows: “Orimolusi Ijebu, o wa ninu igbo lokankan.” – meaning Orimolusi Ijebu is in the forest ahead.  This was how Ademakin became the Orimolusi of Ijebu-Igbo.  Later, Ogunelegi left this forest and re-settled in an area known till today as “Idode”.  The seat of Orimolusi is at “Oke Sopen”.  Over time, more people came to settle in the area, and among these people, some named their area “Ojowo”, while others named theirs “Atikori”, “Okeagbo”, and “Japara”.  Total settlements in this forested area were five in number.  Other villages like: Asigidi, Igboaire, Awa, and Odo Molu later merged with them.  Each of them had their own village heads, but they all accepted the Orimolusi as the overall head.