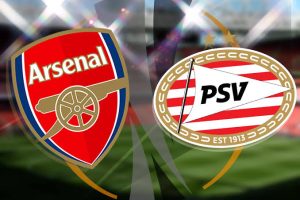 Arsenal host PSV in a rescheduled Europa League tie tonight looking to seal their spot in the knockout stages.

The Gunners have won all of their matches in Europe so far this season, sitting top of Group A ahead of PSV despite the two sides playing only three games each so far.

That’s due to this fixture being postponed after the Queen’s death last month, with it squeezed into the calendar for tonight after Arsenal’s huge Premier League clash with Manchester City was moved to make room.