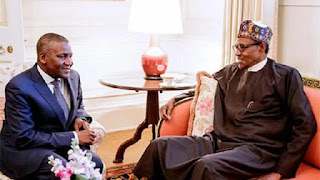 The United States described the Dangote Group of Companies’ business strategies as disastrous to the Nigerian economy.

Owned by Africa’s richest man, Aliko Dangote, it is the largest conglomerate in West Africa with over 30,000 employees.

A report published in 2010 on Wikileak’s website said even though Dangote played a major role in Nigeria’s economy, “many products on the country’s import ban list are items in which it has major interests.”

“Although an undiluted success in terms of wealth accumulation, Dangote personifies the duality in Nigeria’s economy,” the American government said while maintaining that the duality “presents a dilemma for country’s economic policy.”

It accused Dangote Group of blocking investment that the company may see as major competitors, noting that “Weighing everything in the balance, we believe the Dangote model is harmful to Nigerian and American interests in the long run.”

The American government further warned, “Unfortunately, the Dangote model will likely be the one most emulated until its beggar-thy-countrymen contradictions become more apparent.”

It is safe to say the assertion of the U.S. government has been evident in some of the tactics employed by the conglomerate.

Dangote Group faced wide criticisms in the past years over what detractors described as favouritism from the Nigerian government.

The company faced backlashes after it called for a total ban on tomato importation in 2019 when it started its tomato processing subsidiary.

Barely two weeks ago, the conglomerate proposed a provision in the Petroleum Industry Bill (PIB) seeking to ban the importation of oil by companies without refining licences, which according to the company, will help spur investments in Nigeria’s oil and gas industry.

Dangote also recommended that the volume of fuel imported should be distributed according to what each refinery produces.

Aliyu Suleiman, a chief strategist at Dangote, suggested the anti-competition approach during a visit by members of the National Assembly’s joint committee on PIB to the company’s project site.

The group proposed that only companies with licences to refine crude oil should import fuel whenever demand surpass available fuel or when a refinery is undergoing maintenance.

The recommendation came at the time Dangote Group was on the verge of completing a 650,000 barrels-per-day refinery in Lagos.

Financial experts, however, said the Dangote refinery should not be allowed to become a monopoly in the manner of the state-run NNPC, although it remained unclear how the conglomerate would be prevented from holding a monopoly if the controversial clause makes it into the PIB.

This is also evident in the reopening of land borders to Dangote Group in November last year, when it was allowed to transport its products to neighbouring West African countries.

Nigeria had shut its land borders in August to give room for the consumption of home-grown products, but the access granted to the company was said to be based on an authorisation issued by the President Muhammadu Buhari-led administration.

A businessman and founder of Stanbic IBTC, Atedo Peterside, faulted the move.

He asserted that it portrayed Nigeria’s economy as favouring only the well-connected.

“Allowing legitimate exporters and importers to move their goods across the border should be a no-brainer,” Mr. Peterside said in a tweet.

“Why refuse everybody else and allow only one company (Dangote)?”

He added, “This is why some of us argue that the Nigerian economy is rigged in favour of a handful of well-connected persons.”

A spokesman for Dangote Group Tony Chiejina declined repeated requests for a reaction to the damning allegations, insisting instead that our reporter should visit him at the company’s headquarters in Lagos before comments could be provided.